Wanting to know more about basic teachings of Christadelphianism

Those who would like to know more about what the founder of the Christadelphians wrote, can find several parts of his writings and some other authors from the early days of the brotherhood in the new look at "Messiah for all". 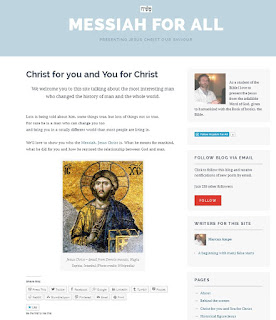 At the new website concerning the messiah, Jesus Christ from Nazareth, whose real name was Jeshua, an effort is made to place the master rabbi and his teachings in a clear biblical light. To come to know Jesus better it is important to go back to the early times of mankind. Therefore the site starts by the total beginning of mankind and looks at the evolution of man. Eden was the original place that God created where He would meet with man and later we shall see this place recreated in Ezekiel’s vision and how the choices of those first people triggered the need of a provision made by God, which came to fulfilment with the life of the Nazarene born in Bethlehem.
Adam was placed in the Garden of Eden with the task “to dress it and to keep it” (Genesis 2:15). Ezekiel’s vision of a temple was given with a similar command to “keep the whole form thereof, and all the ordinances thereof’’ (Ezekiel 43:11). Adam failed to keep the Garden of Eden and its ordinances and was cast out. Israel had likewise failed to keep the first temple and its ordinances and had been exiled.

After placing the first man in the spotlight the site "Messiah for all" will continue to look at the position of man and what human thinking introduced by the years of different approaches to the Word of God and to the religious attitude.

To do this it uses also writings from brothers of the begin years of the Brotherhood of the Christadelphians. One of the major works is the exposition of the Kingdom of God with reference to the time of the end and the age to come as presented by John Thomas, writer of a.o. Apostolic Advocate 5 volumes, 1834-38), Herald of the Future Age (4 volumes, 1845-48) and Herald of the Kingdom and Age to Come (11 volumes, 1851-61). Like Christendom Astray, the book Elpis Israel also emerged as a result of a series of lectures (given in 1848) dealing with the Hope of Israel. It sets out in systematic form Bible teaching about sin, death and reconciliation, and the purpose of God to fill the earth with His glory as the waters cover the sea.

You may find the book Elpis Israel in the Christadelphian bookstore.

Fragments from Elpis Israel and added Bible quotes, starting from the article: