China has an estimated 21 million Muslims, who have developed their own set of Islamic practices with Chinese characteristics. The biggest difference is the development of independent women's mosques with female imams, something scholars who have researched the issue say is unique to China.

In Kaifeng, there are 16 women's mosques, one-third the number of mosques for males.

Shui Jingjun, of the Henan Academy of Social Sciences and co-author of a book on the phenomenon, says that so far there are no women's mosques in other countries. In most of the Muslim world, women pray behind a partition or in a separate room, but in the same mosque as men.

Shui points out that the women's mosques in China are administered independently, by women for women, in addition to being legally separate entities in some cases.

Controversy still rages in the Muslim world about whether women can be imams. In 2006, Morocco became the first country in the Arab world to officially sanction the training of female religious leaders. Women pray at a the Wangjia mosque in Kaifeng. There are 16 women's mosques in the city, one-third the number of mosques serving male Muslims.

China is the only country to have such a long history of female imams. However, there are things that, according to the customary practices of Chinese Muslims, female imams can't do.


For 14 years, Yao has been a female imam, or ahong as they are called here, a word derived from Persian. As she leads the service, Yao stands alongside the other women, not in front of them as a male imam would. But she says her role is the same as a male imam. 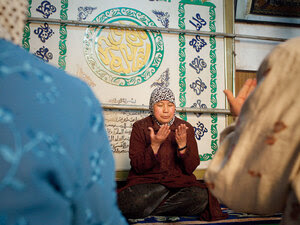