Soon after he was ordained, he was appointed novice master, in charge of training the newest recruits. He went on to become provincial, or national leader, before joining the church hierarchy as a bishop in Buenos Aires. Francis has chosen a papal coat of arms featuring the Jesuit seal: a sunburst containing a red cross and the "IHS" abbreviation for Jesus Christ.


When first elected, Benedict XVI had promised to obviate his Church of the "filth" of clerical sex abuse. But nothing much changed and the world could see proofs that the Pope from Germany continued covering up abuse and failed to protect children from paedophile priests.

Former Cardinal Jorge Bergoglio, last month, stepped out on the balcony of St. Peter's Basilica – the first Jesuit to be elected pope.
Jesuits swear an oath of obedience to the papacy and have been dubbed "God's Soldiers" for their readiness to (Jesuits brought Christianity to 16th-century Japan. A 19th-century Belgian Jesuit was a peace negotiator between the U.S. government and Sioux Indians.) 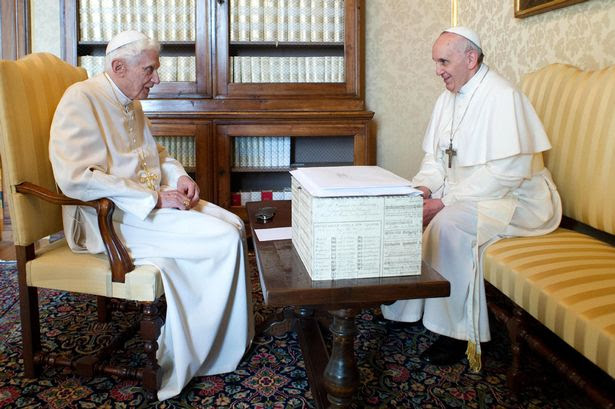 When he appeared on the balcony and the day afterwards we could see for the first time a pope who was not afraid to make jokes or to do things at the spirit of the moment, improvising with a smile on his face.

Soon he was to be confronted with a serious problem which took the smile on many their face and brought a black page in the history of the Catholic Church.

Victims of sex abuse by clergy had called for a strong response from the new pontiff to the crisis which has rocked the Church.

The new pontiff Francis I called on the Church's office that is tasked with investigating sexual abuse charges to "act decisively" in these matters, according to a Vatican statement.
The Church must enact "measures to protect minors, help for those who had suffered such violence in the past, [and] due process in confronting the culprits," the pope said.


Francis, in a meeting with the Holy See's  head of the Congregation for the Doctrine of the Faith, Archbishop Gerhard Mueller, had declared that combating sexual abuse was important "for the Church and its credibility", a statement said.
Francis inherited a Church mired in problems and a major scandal over priestly abuse of children. It was believed to be the first time he had taken up the issue of sex abuse with a senior member of his staff since his election on March 13.

Francis I said the Vatican department which includes the office of the "promoter of justice", or sex crimes prosecutor, which investigates cases of sexual abuse and decides if priests are to be defrocked. It should continue to "act decisively as far as cases of sexual abuse are concerned, promoting, above all, measures to protect minors, help for those who have suffered such violence in the past (and) the necessary procedures against those who are guilty," a statement said.

It said the pope wanted Catholic bishops around the world to promote and put into place "directives in this matter which is so important for the witness of the Church and its credibility".

A victims' group, the Survivors Network of those Abused by Priests (SNAP) said the statement did not go far enough and criticized it for saying that the Church's stance against sexual abuse was "a continuation" of the line wanted by Francis' predecessor, Pope Benedict.

"Action, not discussion, is needed," SNAP said in a statement.
"We can't confuse words with actions. When we do, we hurt kids. We must insist on new tangible action that helps vulnerable children protect their bodies, not old vague pledges that help a widely-discredited institution protect its reputation," it said.

SNAP and other victims groups say there is much still to be discovered about how the Church behaved in the past and want more bishops who were aware of abuse to be held responsible.

Manifests for believers #1 Sex abuse setting fire to the powder

Roman Catholic Church in the United States of America at war

Feeling-good, search for hapiness and the church