Pope Francis I who becomes more and more popular because of his own simple attitude has issued his first apostolic exhortation, Evangelii Gaudium (The Joy of the Gospel), following the synod of bishops on the new evangelisation in October 2012.

The Gospel in itself is a bringer of Good News and tells us the story of how Jesus brought the Word of God to the people and instructed his followers to do likewise, evangelising all over the world.
“The Joy of the Gospel fills the hearts and lives of all who encounter Jesus,” the Pope wrote, inviting Christians to “a renewed personal encounter with Jesus Christ.” said the Pontiff to a number of people in St Peter’s Square on Sunday.
Those who call themselves Christians should know that they have to follow their leader of whom they got their name: Jeshua the Christ. Jesus Christ gave his followers commandments and his instructions focused on the love of his Father, the Only One God and on his Father His commandments.
In the evangelisation we should give an emphasis on God’s saving love before proclaiming doctrines and follow the “way of beauty,” the Pope said. Patience and “respectful and compassionate listening” are also a key part of evangelisation, he added.

“The Gospel tells us to correct others and to help them to grow on the basis of a recognition of the objective evil of their actions, but without making judgments about their responsibility and culpability… our personal experience of being accompanied and assisted, and of openness to those who accompany us, will teach us to be patient and compassionate with others, and to find the right way to gain their trust, their openness and their readiness to grow,” 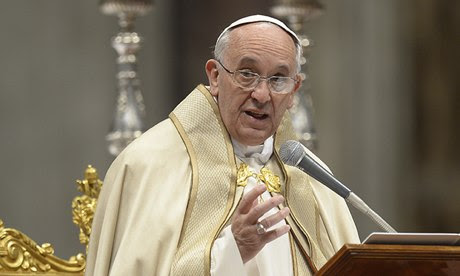 Pope Francis also explained a “profound connection between evangelisation and human advancement,” saying that the

“Gospel is not merely about our personal relationship with God”

and that religion cannot be “restricted to the private sphere,” but is concerned with society, since

“all Christians … are called to show concern for the building of a better world.”

As he correctly said "all Christians" which includes the protestants, trinitarian and non-trinitarian Christians.
Naturally the 48,000-word document covers a wide range of Catholic issues including abortion, the role of the papacy in the 21st century and the question of women priests.
Many may look at the decline of priests or pastors, but for the Catholic church father the issue of women priests was “not open to discussion”.
Matters which are connected with our encountering other people, to talk to and about, area also written about in the document, including the global economy, the plight of the poor and the relationship between science and religion. He also discussed ecumenical and interreligious dialogue, making specific reference to Islam.

“In order to sustain dialogue with Islam, suitable training is essential for all involved, not only so that they can be solidly and joyfully grounded in their own identity, but so that they can also acknowledge the values of others, appreciate the concerns underlying their demands and shed light on shared beliefs,” the Pope said.

“We Christians should embrace with affection and respect Muslim immigrants to our countries in the same way that we hope and ask to be received and respected in countries of Islamic tradition. I ask and I humbly entreat those countries to grant Christians freedom to worship and to practice their faith, in light of the freedom which followers of Islam enjoy in Western countries! Faced with disconcerting episodes of violent fundamentalism, our respect for true followers of Islam should lead us to avoid hateful generalisations, for authentic Islam and the proper reading of the Koran are opposed to every form of violence.”

Not only the Catholic Church can learn from this apostolic exhortation. It should be  “a challenge to everyone, without exception.”
The joy of the Gospel, the exhortation’s very title, should embrace all Christians. By all our actions we should convince others of the truth of that Gospel.
The pope said.

“It presents a vision for the pattern of life of the Church present throughout the world, for parish life, for the work of the preacher, for the catechist, for the bishop, for the business person and the politician and for the ministry of the Pope himself.

It contains a radical look at the crisis of poverty in our world and at the role of economics.

It offers a new light on the Church’s social teaching and calls for dialogue between faith, reason and science, with our fellow Christians, with the Jewish community, with other religions and with society, especially in the context of religious freedom.

This dialogue about faith, reason and science was already started by the Christadelphians in "Stepping Toes", with articles like:


Our world may have developed into the 21st century, but that does not have to mean that science has conquered religion and made it not necessary any more.

Contrary to his previous encyclical writing Lumen Fidei, released in July, essentially based on the work of his predecessor, Benedict XVI, this Evangelii Gaudium is very much his own work.
Apostolic exhortations are often based on deliberations of synods of bishops, and although this one takes into account the October 2012 synod on the new evangelisation, last June, Pope Francis informed the ordinary council of the Synod of Bishops, which is normally responsible for helping draft post-synodal apostolic exhortations, he would not be working from their draft.
Instead, the Pope said, he planned to write an “exhortation on evangelisation in general and refer to the synod”, in order to “take everything from the synod but put it in a wider framework”.
For the full text of Evangelii Gaudium go here.
For key quotes from the Pope’s document, go here.