A Christian is one who should follow the teachings of Jeshua, the Nazarene born in the tribe of king David, who is been called the son of God and the Messiah or Christ Jesus. One of those tasks Jesus has given to his followers is to go out into the world and to evangelize or witness.

According to a new survey from Barna Group. "Is Evangelism Going Out of Style?" evangelism is fading fastest among the middle class.

On Stepping toes I talk about my frustration when I look at the current position of people willing to bring the Good News to others.

73% of born again Christians say they have a personal responsibility to share their faith with others, but I can not see that they live or take action according to what they believe. Only half (52%) of born again Christians say they actually did share the Gospel at least once this past year to someone with different beliefs, in the hope that they might accept Jesus Christ as their Saviour. Evangelicals have the highest rate of failure to follow through (31% did not evangelize in the past year). By contrast, Catholics are the least likely to believe evangelism is their personal responsibility (34%), but in the United States have the highest success rate (33% did evangelize in the past year).

The study brings out that millennials are the one generation of "born-again" Christians where "the practice of evangelism is notably on the rise." But also that I can not really notice when I do look at the 'preaching world". Despite being known as the "social justice" generation — alleged to be trading spiritual causes for physical ones — evangelism among millennials increased nine percent in recent years, according to Barna. Other generations either stayed the same or declined in their evangelism practices.

Middle-class "born-again" Christians have the lowest rate of evangelism among other household income groups.

This is particularly paradoxical since born again, middle-income adults are the most likely out of all income groups to affirm their personal responsibility to evangelize—76% do so. Yet only 37% of those adults have shared their faith this past year. Furthermore, born again, middle-income adults are evangelizing less and less. For example, from 2010 to today alone, their outreach efforts dropped from 51% to 37%. 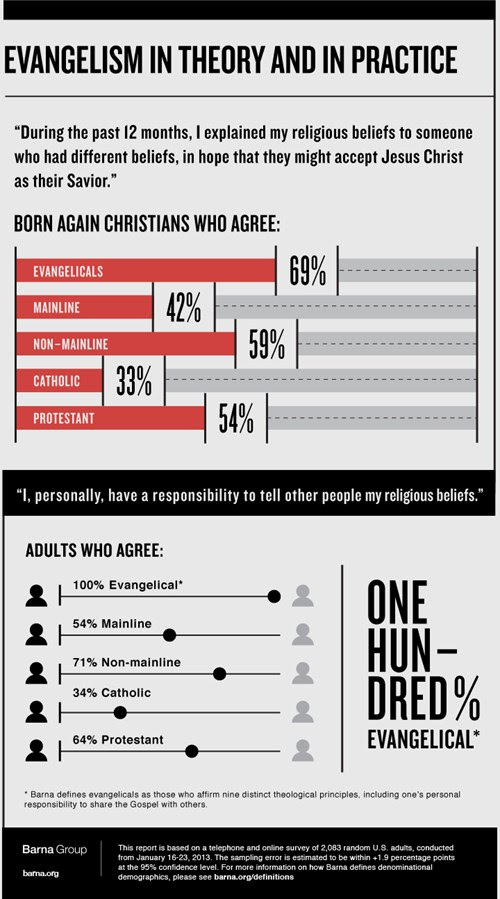