Brussels-born Salah Abdeslam, 26, is a key suspect, who passed the French-Belgian border control after several horrible actions took place in the French capital.
He was reportedly stopped by officers in the wake of the attacks while crossing into Belgium but then let go. This means he and the others in the car must have been very calm and very sure they could get away with it when they could control their nerves, which they did.

He is considered to be the "head" behind Friday night's deadly attacks in Paris by gunmen and suicide bombers were a concert hall, a major stadium, restaurants and bars, were hit almost simultaneously - leaving at least 129 people dead and hundreds wounded. 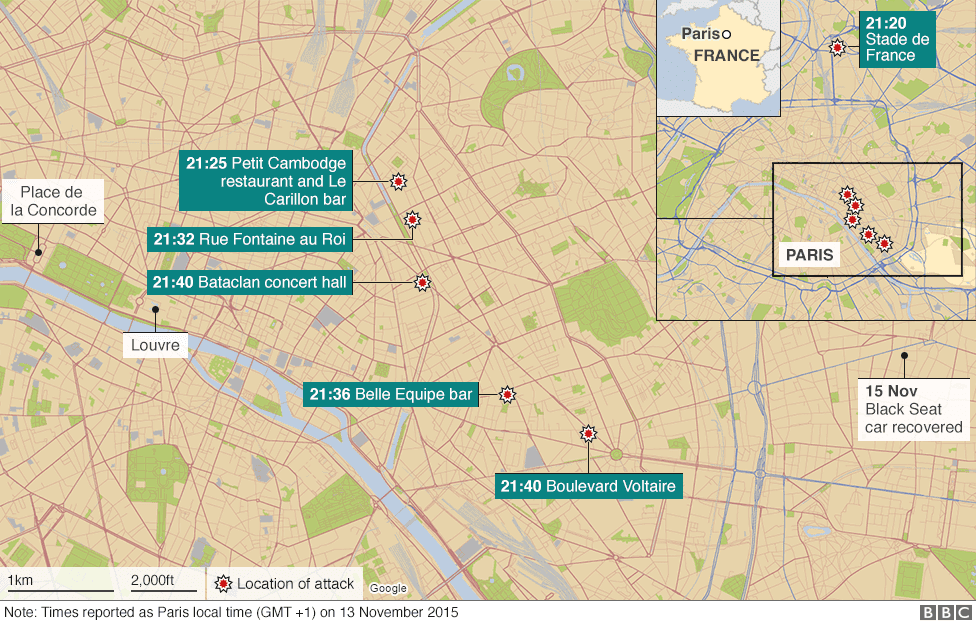 For many present at the seen it was an incomprehensible act, like being at war. the fighters sent from the Belgian capital which is for the jihad fighters a good place to have a safe base in the centre of Europe. From Molenbeek in Brussels three co-ordinated teams found their way to the Paris night life ware with the nice temperatures the terraces still could attract lots of people to have some nice social time.

At 9.20 pm the first of three explosions did not seem to stop the football players in the Stade de France stadium, though on one black football player having the ball at the moment the first bomb exploded outside the stade looks strange and with the second blast we can see his face doubting, though they all just continue like nothing happened.
On the northern fringe of Paris France having an international football friendly against Germany continued whilst after a second man detonated his suicide vest outside a different stadium entrance at 9:30 pm, the president was rushed to safety and the president went to the phone to hear what was going on.

Meanwhile a black Seat car had man shooting with their Kalishnikovs nearer to the centre of town, around popular nightlife spots. The first took place at about 9:25 pm in the 10th district (arrondissement), not far from the Place de la Republique.
A man then crossed the road and turned his semi-automatic rifle on a restaurant, Le Petit Cambodge (Little Cambodia). At the scene more than 100 bullets were fired killing 15 and having 15 severely injured.

The 11th district was the next one on the list. south of the first restaurant attacks, at La Belle Equipe bar in the rue de Charonne two men opened fire on the terrace of the cafe. in two minutes time they managed to kill 19 people and leave a further nine in a critical condition.

But the deadliest attack of the night came at a concert venue on Boulevard Voltaire, also in the 11th district, where the Californian rock group Eagles of Death Metal was playing for a sold out house.
In a black Volkswagen Polo the attackers arived in front of the 1,500-seat 'Bataclan' hall .
Three attackers wearing suicide belts stormed in through the main entrance and into the back of the concert hall.
Eighty-nine people died as the men fired Kalashnikov-type assault rifles into the crowd. At least 99 others are in a critical condition in hospital. 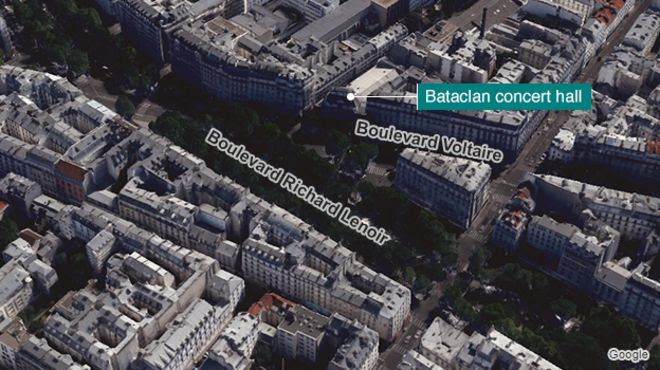 One of the attackers was said to have shouted "God is great" in Arabic. One witness heard a gunman in good French blaming President Hollande for intervening in Syria. It was the first clear evidence that Paris was once again being targeted by Islamists.


By now, President Hollande was in crisis talks with Prime Minister Manuel Valls as well as Interior Minister Bernard Cazeneuve. Mr Hollande announced a state of emergency throughout France and a tightening of border controls.
The order was then given to send elite security forces into the concert hall. As the operation came to a head, at about 00:20, a police officer shot one of the gunmen, and his suicide belt detonated. The siege ended with the other two blowing themselves up.

France's Prime Minister Manuel Valls has said the attacks were planned and organised from Syria.
The French police have raided more than 150 locations overnight. Five people have been arrested in Lyon, where police also found an arsenal of weapons.

When it is organised from Syria, they clearly have their pawn in Belgium. Police forces are looking for Brussels-born Salah Abdeslam, 26, as a key suspect.

His brother, Mohammed Abdeslam, has been reportedly arrested in Belgium. A third brother, Braham Abdeslam, 31, has been named as the attacker who detonated his suicide vest on the Boulevard Voltaire.
Another of the dead attackers has been identified as a 29-year-old Frenchman Omar Ismail Mostefai. He had a criminal record but had never spent time in jail. However, he had been flagged up as a possible Islamist extremist.
Bilal Hadfi, 20, has been named as one of three suicide bombers who struck near the Stade de France stadium.
All seven militants had used Kalashnikov-type assault rifles and the same type of explosive vests.
A total of three men were arrested in Belgium on Saturday. More raids have been taking place in the Brussels neighbourhood of Molenbeek, a district with large Turkish and Moroccan communities and which has been connected to a number of Belgium's recent terrorist-related incidents.

An emergency hotline for information: 0800 40 60 05 (within France) as the search for potential accomplices continues.