State of emergency and respect for human rights

In France the situation got so bad the president and his entourage thought it advisable to extend the state of emergency.

In the wake of the failed coup of Friday July 15 the Turkish president who took unseen unprecedented measures has also declared a state of emergency.

Turkey’s parliament has approved a three-month state of emergency, on Thursday by 346 votes to 115, which will allow the government to rule by decree, passing bills that have the force of law unless they are overturned by parliament, where the majority of MPs belong to the ruling Justice and Development party.a bill declaring a state of emergency in the wake of last weekend’s coup attempt and informed the Council of Europe of a partial withdrawal from the European convention on human rights.

At the same time we in Europe could be surprised that Erdogan could so quickly know who was behind the coup and had already on the day after so many people arrested we can question if this not was prepared in advance.


The secretary general of the Council of Europe required Turkey to provide regular updates on the measures taken under the state of emergency, according to the terms of the treaty.
Turkey initially said it had informed the Council of Europe that it would suspend the convention entirely, a more wide-ranging measure likely to have drawn criticism from allies.

“Turkey will derogate the European convention on human rights insofar as it does not conflict with its international obligations,”

the deputy prime minister, Numan Kurtulmuş, was quoted as saying by the state-run Anadolu news agency, in a corrected statement.

Kurtulmuş said Turkey would take the step “just like France has done” under article 15 of the convention, which allows signatory states to derogate certain rights, including freedom of movement, expression and association, during times of war or a major public emergency.

But we do have do question  if Turkey is really willing to respect the human rights, because what we could see already on television shows that they have no respect at all for those international laws of defence and human dignity.

The European Convention on Human Rights (ECHR) may be vague about the conditions that constitute an emergency, so in some ways, it’s not clear whether what is happening in Turkey constitutes one.

It is not because Erdogan may be elected in a democratic way that he is keeping to democratic laws and is respecting human laws of freedom. even a democratic elected person can not be above the law. An independent and functioning judiciary is fundamental to this. Erdoğan’s purging of the judiciary in Turkey is deeply worrying, to say the least.

France, Turkey and human rights: is a state of emergency the new normal? 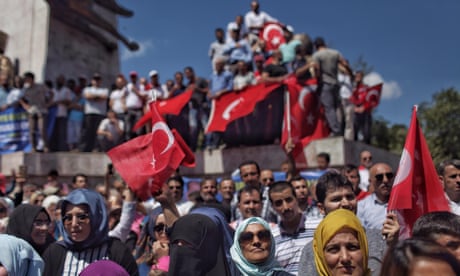 'We see him as one of us': why many Turks still back authoritarian Erdoğan