A vision of a very different future for Kandahar culture

It is not so long since Kandahar, the crucible of the Taliban’s rise to power in the mid-1990s, felt like a city defined by its tumultuous past. Today, for an aspirational parent, the debating competitions, Oxford University Press curriculum and fiercely contested games of musical chairs at Wesa Academy offer a vision of a very different future.

A local entrepreneur founded the school in 2011, when Kandahar province was the pivot for an influx of tens of thousands of US troops fighting to drive the Taliban out of their rural strongholds and secure the city. With those soldiers long gone and the urban centre in the iron grip of a feared police chief, the success of Wesa has triggered a proliferation of rivals.

The biggest city in southern Afghanistan, Kandahar is a focal point for the country’s ethnic Pashtun community, who see a woman’s place as either in the home or veiled behind an anonymising burka. Kandahar served as the seat of the Taliban theocracy, which banned women from work or study until it was overthrown in 2001. But for many years afterwards sympathisers maintained the movement’s repressive influence.

The surge in private education is a barometer of change. The provincial government says that, over the past five years, the number of private schools in Kandahar, a city of half a million, has grown more than tenfold to 31. The school, which educates girls up to the age of 14, and boys up to 18, is so inundated with demand for places that it opened a nearby feeder nursery in September. While only nine of Wesa’s first intake of 58 pupils in 2011 were female, girls now make up more than a third of the 620 students.

The blossoming of private education in the one-time cradle of the Taliban could be seen as a potent symbol of how the west’s intervention in Afghanistan – undertaken at vast human and financial cost – has set the country on a more progressive trajectory. However, the departing foreign forces bequeathed a deteriorating military situation to the country’s embattled security forces.

Projecting the no-nonsense aura obligatory for all hard-pressed headmasters, Sher Ahmed Afghan favours a prompt 7.45am start to assembly at the Wesa Academy in Kandahar. At his command, the throng of pupils pouring through the gate quickly divides into two orderly lines. Boys in smart shirts and ties move to one side of the schoolyard, while a smaller but still sizeable contingent of girls, wearing headscarves in the red, black and green of Afghanistan’s national flag, files towards the other.

Read more about it: 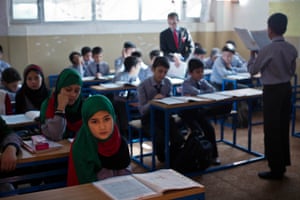