A YouGov pol has revealed that only six of the ten commandments of God are still important to British Christians.
Not to our surprise most Britain's the four which have fallen by the wayside are the requirement not to worship idols, use the God His name in vain, to worship no other God, and to keep the Sabbath day holy.

Concerning the Sabbath or the Sunday since the 2012 ruling by a High Court judge - the first on the issue in nearly a decade - Christians have no right to decline working on Sunday as it is not a “core component” of their beliefs. The fact that some Christians were prepared to work on Sundays meant it was not protected, the court said.


In 1994, when Sunday trading in England was liberalised shopworkers were given a guarantee that working would be strictly voluntary, but the guarantee did not apply to people in other sectors.
The Employment Equality (Religion or Belief) Regulations, published in 2003, say employers must justify Sunday working as a “legitimate business need” and does not give a blanket right to Christians not to work.
If employers fail to treat staff fairly and proportionately, the employee may be able to claim discrimination, the rules add.
The last ruling by judges was when a quarry worker claimed his Christian beliefs had been treated with “contempt” by employers who tried to force him to work on Sundays in 2003.

Stephen Copsey lost his case at the Court of Appeal in 2005, with judges ruling his employer had “compelling economic reasons” for insisting that he worked on Sundays.{Christians have no right to refuse to work on Sundays, rules judge}

When we look at lots of Christians and see what they do on Sabbath and / or on the Sunday it is no surprise courts consider it not of any religious importance.

Keeping the Sabbath Day holy is seen as the least relevant of the Commandments in the modern era. Fewer than one in five (19%) Britons say keeping Sundays holy is still an important principle to live by, including fewer than a third of Christians (31%) and 7% of the non-religious. Almost half of Catholics said they supported keeping the Sabbath day holy nut by that they mostly mean keeping the Sunday as rest day. Just 29 per cent of Protestants said they felt the same.

Concerning the first commandment a real Christians must recognise that the majority of Christians do worship more than one god and mostly do not even know the Name of the Holy Father. As such they do not mind swearing or using one of more tittles of God to make their words stronger or to show their disgust over something.
Just under a quarter (23%) of the overall population say that you may not use the word "God" in or as a curse, including 38% of Christians and just 7% of the non-religious.

Less than one in three Christians believe in preserving Sunday as a day of rest, with 38 per cent against using the Lord's name in vain and 43 per cent condemning the worshipping of idols, though lots of them do not worry to bow down in front of graven images or statues and pictures of gods and saints.

On Tuesday the Archbishop of Canterbury signalled support for a day of rest, tweeting that he was "encouraged" by the Chief Rabbi's campaign for people to spend time offline over the Sabbath.
While almost half of Catholics said they supported keeping the Sabbath day holy, just 29 per cent of Protestants said they felt the same.
The Bishop of Chelmsford, Stephen Cottrell, said: " In an age as busy, frantic and feverish as ours I would have thought that keeping the Sabbath, or at the very least observing a balance between work and rest and play was more important than ever.
Sabbath is both a radical idea and a practically useful idea for it simply acknowledges that we need to rest and we need to play. Indeed, it says this is what we are made for."

He also lamented Christians' abandonment of the commandment about idolatry, saying:


"Whether it is celebrity, wealth, a certain designer label pair of jeans jeans or a make of car, we have all construct a sense of worth in the desire to own and possess certain things that we believe will give value.

Today we do find lots of christians spending more time on their idols than on the Divine Creator God. In the United States we see a similar trend having 'money' or 'wealth' having become the most important god. There even in mega-churches people have special services to offer them more wealth.

Fewer than a third of Britons (31%) say that people should not worship idols (defined in the survey as statues or symbols). Christians are split on whether they still consider this to be an important commandment, with 43% saying it is and 44% saying it is not. Meanwhile, only one in five non-religious Brits (20%) say it is still an important rule, though most, not to say all, of the respondents who claim to be Christian worship a triune god and as such go in against the first commandment of God.

Only one in five Britons (20%) still believe that the Christian God’s monopoly on worship is still relevant in modern Britain (including 36% of Christians and just 5% of non-religious Brits).


The survey shows that believers and non-believers alike support the simple, ancient statements which continue to provide the foundations of our legal system and our shared sense of right and wrong.

Having been central tenets of Biblical teaching for several millenia 6 from the 10 commandments are still considered of value today.

Being honest about certain matters seems surprisingly still important for 87%, though we can see a lot of boasting and hear lots of fake stories and hear a lot of people not telling the truth.
Not bearing false witness (telling lies) about others came third among all groups, with 87% of all Brits, 90% of Christians, and 86% of those without a religion saying that it is still important to live by.

Honesty has also to do with how we treat others and how we behave ourselves in relationships. Though we hear a lot about people having good fun with different people of the opposite or even same sex, close to three quarters (73%) of the population at large say that not committing adultery is still a top life principle, including 69% of non-religious Brits and 76% of Christians. Which is strange that it is so high on the roster because we encounter lots of divorces and mixed families.

Today we also find lots of elderly people left alone in homes. Police also often have to come to help by violence against parents. Though the poll shows that "Honouring thy father and thy mother" is still an important rule to follow for 69% of all Britons, including 78% of Christians and 60% of the non-religious. 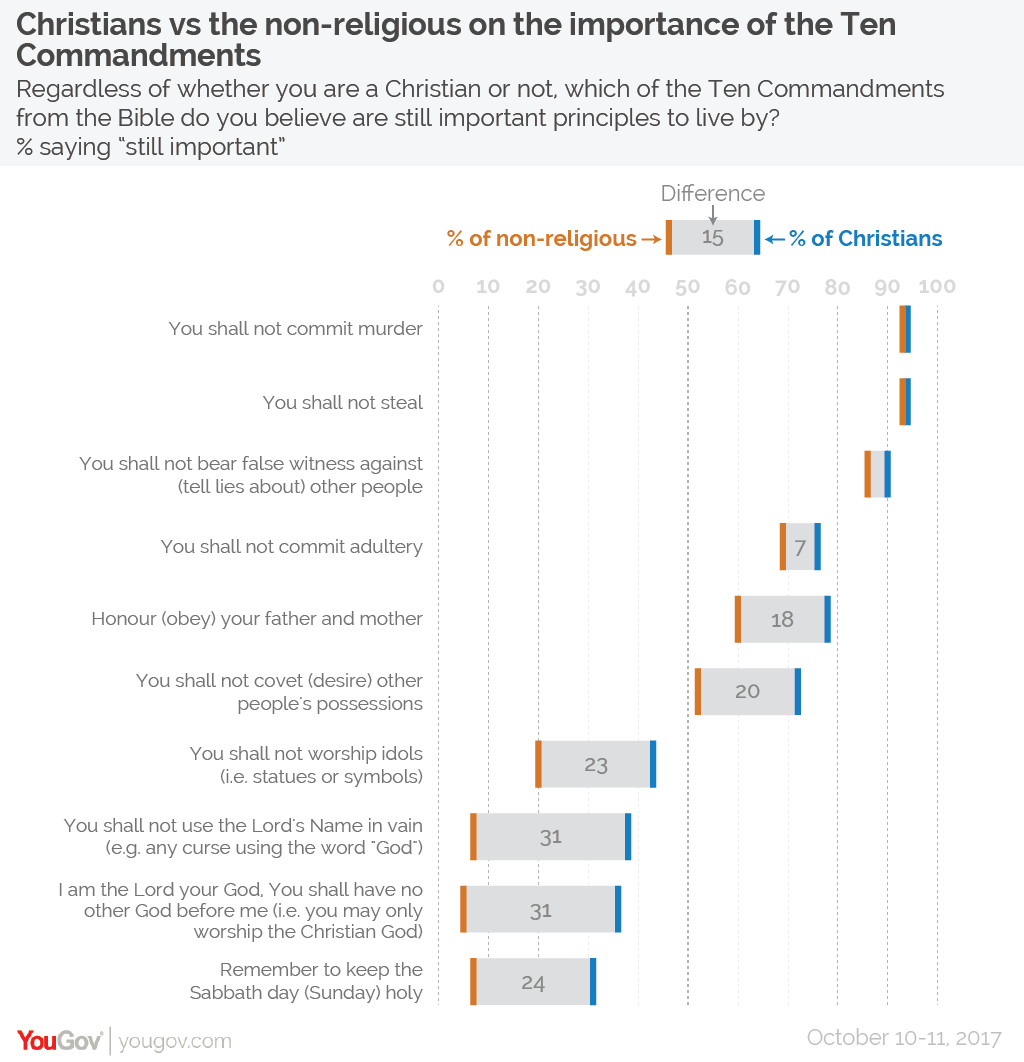 
"This survey shows that the practical morality which has lain at the heart of the Judeo Christian tradition for the last 3500 years still finds favour with most British people today, even where explicitly religious commandments gain less support.