There are fewer than 200 original printings of the King James version known to exist.
On a shelf in the St Laurence Church in Hilmarton, near Calne, Wiltshire church a rare original King James Bible, of which the pages of the 400-year-old Bible were trimmed by a priest in the 19th Century, has been discovered . 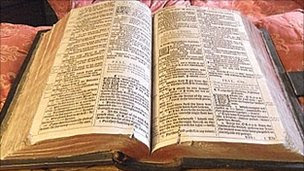