This year it is big fashion to send a wishing lantern up in the air.
The Paper lanterns come in various shapes and sizes, as well as various methods of construction. In their simplest form, they are simply a paper bag with a candle placed inside, although more complicated lanterns consist of a collapsible bamboo or metal frame of hoops covered with tough paper.

The sellers promote it with saying that the sky lantern is like salute. The people will fly the sky lantern to the sky with their wish and prayer in a festa such as the Christmas day, the New Year, wedding ceremony, or other commemorative occasion. On the hot-air round paper lantern balloon a wish is written and by letting it go up in the air people do hope their wishes come true. 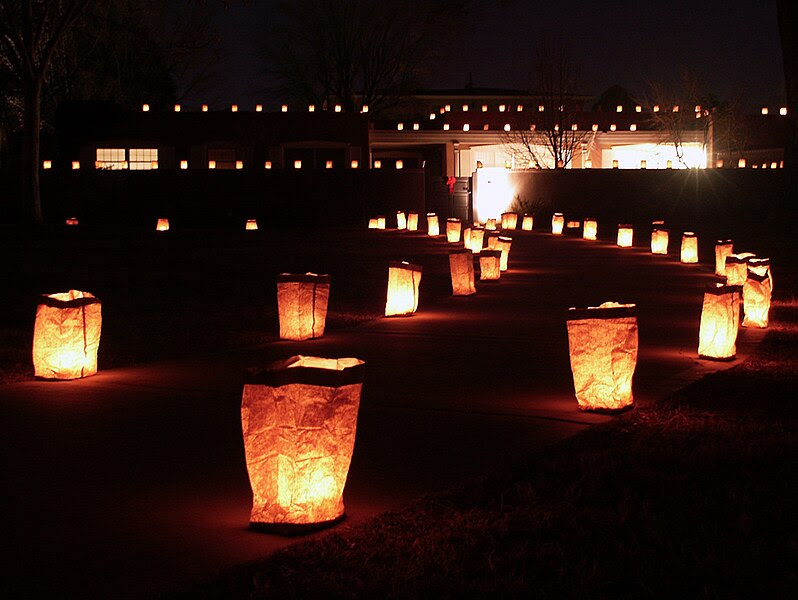 People think this is a good opener to Christmas Eve, wich refers to the evening or entire day preceding Christmas Day, a widely celebrated festival they say commemorating the birth of Jesus of Nazareth that takes place on December 25.

But Jesus was born on October the 17th 4 bCE. So what has Christmas and those wishing lights and balloons to do with the birth of the promised Messiah?

In fact, Santa Claus, reindeer, bells, flickering lights, Christmas trees a.o.have nothing to do with what happened in Bethlehem at a time there could not be any snow at all. So it is very strange that we even do find in warm countries, festivities on the 25th of December, when it is high Summer there, with people wanting to put on red bonnets and having winter decorations everywhere around.

The new trend of the wishing lampoons adds a new pagan tradition to the many Celtic ones/ Now the Thai and Japanese traditions and gods become introduce in the Christian traditions.

But can real Christians agree to go along with that?
Is it not better we do not go with such traditions and keep our hands off such actions?

Perhaps you think it does not harm to go along with such sorts of traditions. But we should remember that for that we do have perhaps a jealous God (Exodus 34:14; 1 Corinthians 10:22), who does not like any connection with falls gods or falls believes.

As Christians we do have to be careful when we want to celebrate the end of the year in the cold and dark period not to give the impression on others that we do agree with the festivities for the goddess of light, which her birtday and celebration is on December the 25th.

Any uncleanness in our actions we do have to throw over board. It may be a big desire to enjoy the Christmas celebrations like they are done in many Christian countries, but do they really honour Jesus Christ? Check what the main focus is by those celebrations? Try to see certain connections of introduced figures and ornaments.

Is the Christ manifest at those celebrations? Or is the main accent on a Santa Claus and presents? Can you agree with the tale of the Santa Claus and would you see a connotation with the Christmas Man and the man they are so called to celebrate: the Lamb of God, Jesus Christ?

Perhaps there was a time that we all did those very things. But when we got baptised did we not choose to follow Christ Jesus and his followers, who did not celebrate the birth of their master. do you think Jesus himself would have loved that his birthday was considered the most important day to feast?
Did God not give the Pascha? Should 14 Nisan not be the most important 'day to remember'?

Does the Apostle Paul not write: "If, then, you were raised with Messiah, seek the matters which are above, where Messiah is, seated at the right hand of Elohim. Mind the matters above, not those on the earth. For you have died, and your life has been hidden with Messiah in Elohim. When the Messiah, who is our life, is manifested, then you also shall be manifested with Him in esteem. Therefore put to death your members which are on the earth: whoring, uncleanness, passion, evil desire and greed of gain, which is idolatry. Because of these the wrath of Elohim is coming upon the sons of disobedience,1 Footnote: 1Eph. 2:2, Eph. 5:6. in which you also once walked when you lived in them. But now, also put off all these: displeasure, wrath, evil, blasphemy, filthy talk from your mouth. Do not lie to each other, since you have put off the old man1 with his practices, Footnote: 1Rom. 6:6, Eph. 4:22. and have put on the new one who is renewed in knowledge according to the likeness of Him who created him, where there is not Greek and Yehud?ite, circumcised and uncircumcised, foreigner, Scythian, slave, free, but Messiah is all, and in all. Therefore, as chosen ones of Elohim, set-apart and beloved, put on compassion, kindness, humbleness of mind, meekness, patience, bearing with one another, and forgiving each other if anyone has a complaint against another, indeed, as Messiah forgave you so also should you. But above all these put on love, which is a bond of the perfection. And let the peace of Elohim rule in your hearts, to which indeed you were called in one Body, and be filled with thanks. Let the Word of Messiah1 dwell in you richly, teaching and admonishing one another in all wisdom, singing with pleasure in your hearts to the Master in psalms and songs of praise and spiritual songs. Footnote: 1John 12:48, Dt. 18:19, Rev. 19:13. And whatever you do in word or deed, do all in the Name of the Master יהושע,  giving thanks to Elohim the Father through Him.
(Colossians 3:1-17 The Scriptures 1998+)

We do know that millions of people around the world with no Christian or religious affiliation or background also celebrate Christmas and Christmas Eve. The emphasis of celebration on Christmas Eve varies from country to country and region to region.

In case we use those dark days to come together and enjoy a family gathering, lets do that in honesty, not adhering to the symbols of pagan traditions. In cold, dark regions, fire and light may bring some sunshine in the house, and a spar or Chrismastree may bring some air-refresher in the room. But be honest and keep clean in the eyes of God, and withhold yourselves from those things God would not want.

Jesus begotten Son of God #2 Christmas and pagan rites
6. Interweaving with heathen or pagan rites
We as sincere Bible Students and followers of Christ should take the Words of God into account and should know that God does not like us to interweave with heathen happenings and idolatrous things. Christmas time is not a season of revival and up-building in the Church of [...]
Christmas, Saturnalia and the birth of Jesus
Christmas trees
+

The wrong heroIn the Western World we can find people who love to honour a creator that is far beyond any human person. In the East people worship other gods, but also do have three or two headed divinities. The clergy and followers of the many sects of Christendom worship also such more than one in one god, but they prefer not to give them a specific name. A lot of those worshippers give preference to have a nameless triune lord or do not know the name of their God. though the one who created the earth, heaven and everything around us, has a name that He picked out Himself - YaHuWhah = Jehovah.
+
You may take Jesus as your hero, but do not make him more important than he is and do not give him a higher position than he himself would want to take. Listen carefully to his words and those of his Father. In the past God spoke to our forefathers through the prophets at many times and in various ways. He also had given us his son, the Master teacher. Because in these last days God has spoken to us by his Son, we better take note of what that son said.

Life is more than food, and the body more than clothes