This is a bit early to send, but in a week’s time the news will be stale.
The resignation of Pope Benedict XVI has come as a shock to the Vatican and Catholics generally. He has been popular with the laity and most of the clergy He has also placed relations with Israel on a better footing by rejecting “Secessionism” – which denies that Israel is “the chosen race” and therefore has no right to the Promised Land. However, since a conference he called to discuss the Middle East was held in Rome during October 2010, he has had serious opposition to this policy, as shown below:

JERUSALEM POST 23/10/2010 - In a final joint communiqué, the bishops also told Israel it shouldn’t use the Bible to justify “injustices” against the Palestinians.  The bishops issued the statement at the close of their two-week meeting, called by Pope Benedict XVI to discuss the plight of Christians in the Middle East amid a major exodus of the faithful from the region.
The Catholic Church has long been a minority in the largely Muslim region but its presence is shrinking further as a result of war, conflict, discrimination and economic problems.                                                                       .
“The Holy Scriptures cannot be used to justify the return of Jews to Israel and the displacement of the Palestinians, to justify the occupation by Israel of Palestinian lands,” Monsignor Cyril Salim Bustros, Greek Melkite archbishop of Our Lady of the Annunciation in Boston, Massachusetts, and president of the “Commission for the Message,” said at Saturday’s Vatican press conference. “We ‘Christians’ cannot speak of the ‘promised land’ as an exclusive right for a privileged Jewish people. This promise was nullified by Christ. There is no longer a chosen people – all men and women of all countries have become the chosen people. “Even if the head of the Israeli state is Jewish, the future is based on democracy. The Palestinian refugees will eventually come back and this problem will have to be solved,” the Lebanese-born Bustros said.

This brought swift condemnation from both Jewish and Fundamentalist Christian spokesmen.
Mordechay Lewy, Israel’s ambassador to the Holy See, told The Jerusalem Post that Bustros, in saying that Jesus nullified God’s covenant with the Jewish people, was “returning to secessionist theology, contradicting Second Vatican Council teaching and Pope Benedict himself – who has welcomed the return of Jews to their ancient homeland.”
“Also,” added the ambassador, “by inviting all Palestinian refugees to return and denying Israel’s right to define itself a Jewish state – the only such in the world – he is regressing to hard-line positions that deny Israel’s right to exist.”

It would appear that the next pope will have to deal with a rather divided fraternity among the cardinals and other leading clerics when dealing with weighty Middle East policies.
This is in keeping with Biblical prophecies which indicate the obstinacy that the nations will encounter when endeavouring to solve the problem of Israel - and Jerusalem in particular.
Zechariah 12:2  Behold, I will make Jerusalem a cup of trembling unto all the people round about, when they shall be in the siege both against Judah and against Jerusalem. 3  And in that day will I make Jerusalem a burdensome stone for all people: all that burden themselves with it shall be cut in pieces, though all the people of the earth be gathered together against it.
Media speculation has also centred around the numerous violations by the Roman Catholic clergy perpetrated on their charges and the negative publicity resulting from it must play on the pope’s mind, especially that the investigations are now centred in Bavaria, the pope’s home country.
The shattering effect this is having on the Roman church seems the likely fulfilment of
Revelation 14: 8  And there followed another angel, saying, Babylon is fallen, is fallen, that great city, because she made all nations drink of the wine of the wrath of her fornication. 9  And the third angel followed them, saying with a loud voice, If any man worship the beast and his image, and receive his mark in his forehead, or in his hand, 10  The same shall drink of the wine of the wrath of God, which is poured out without mixture into the cup of his indignation; and he shall be tormented with fire and brimstone in the presence of the holy angels, and in the presence of the Lamb:

This only the beginning of troubles for the R.C.Church as there are three more judgements to follow!

NOT JUST SYRIA!
Although to slaughter and refugee situation in Syria occupies much of the Television news bulletins, similar situations are developing in most Arab countries from, Syria, Jordan, Iraq and Egypt, across Northern Africa and down to the Central African countries. The unrest and violence doesn’t stop there but is becoming world-wide.

Every day we hear of terrorists bombing innocent civilians – women and children – and then proudly owning up as the perpetrators of these horrific murders as if God Himself approved of them! They have some terrifying experiences awaiting them at the hand of the judge of all the earth!

In Bangladesh, Shri Lanka, and India thousands pour onto the streets in protest for their rights, while Pakistanis plead with their government to stop the slaughter of so many Shi’ites!
In the Pacific region China and Japan argue over almost bare islands while North Korea threatens their kinsmen in the South with annihilation from atomic bombs!

You will readily bring to mind the words of our Lord Jesus, most recorded in three of the gospels:
Luke 21:9  But when ye shall hear of wars and commotions, be not terrified: for these things must first come to pass; but the end is not by and by. 10  Then said he unto them, Nation shall rise against nation, and kingdom against kingdom: 11  And great earthquakes shall be in divers places, and famines, and pestilences; and fearful sights and great signs shall there be from heaven. 25  And there shall be signs in the sun, and in the moon, and in the stars; and upon the earth distress of nations, with perplexity; the sea and the waves roaring; 26  Men’s hearts failing them for fear, and for looking after those things which are coming on the earth: for the powers of heaven shall be shaken.

The Gospel in Mark13 has these words as well:
Mark 13:19  For in those days shall be affliction, such as was not from the beginning of the creation which God created unto this time, neither shall be. 20  And except that the Lord had shortened those days, no flesh should be saved: but for the elect’s sake, whom he hath chosen, he hath shortened the days.

Well, it is comforting to know that the Lord God is aware of all that is going on – but how can He show us that He knows? Fulfilment of prophecy is His best witness - BUT did you see this? 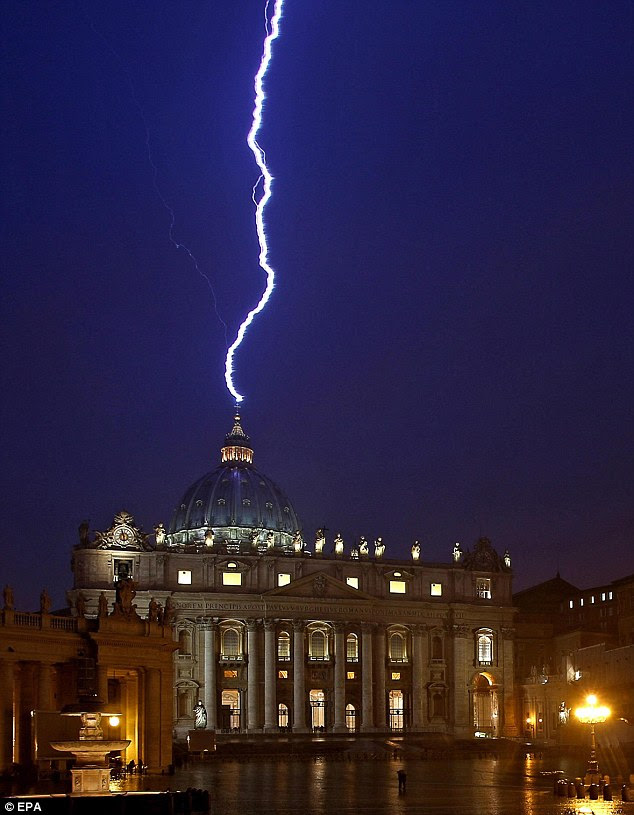 This photo of lightning striking the top of St. Peter’s basilica in Rome occurred only hours after the pope’s resignation speech! Was it approval or a warning? Or both?
Job 37: 2 Hear attentively the noise of his voice, and the sound that goeth out of his mouth. 3 He directeth it under the whole heaven, and his lightning unto the ends of the earth. 4 After it a voice roareth: he thundereth with the voice of his excellency; and he will not stay them when his voice is heard. 5 God thundereth marvellously with his voice; great things doeth he, which we cannot comprehend.

Deut. 29:29  The secret things belong unto the LORD our God: but those things which are revealed belong unto us and to our children for ever, that we may do all the words of this law.

In the Master’s Service,
Art

"Surely the Lord GOD will do nothing, but he revealeth his secret unto his servants the prophets."  Amos 3:7