After Benedict XVI ended his troubled eight-year papacy last month, announcing he was no longer up to the rigors of the job, the Catholic Church had to look out for a new leader. Ratzinger became the first pontiff in 598 years to resign. The 115 cardinals who are younger than 80 and eligible to vote chose their new leader after two days of voting.

Yesterday, Wednesday March 13, 2013, 5 minutes past seven white smoke came out of the chimney of the Sistine Chapel, where many eyes of the world looked at. One hour later came the oldest deacon to say "Abemus Papam".

On the fifth ballot enough cardinals chose for one man to take over the duties of the retired pope Ratzinger.. The Jesuit Jorge Mario Bergoglio of Argentina, the Archbishop of Buenos Aires, took on the duty and to my mind it was the first of contemporary popes who asked the people to pray for his duties.

Coming from the Latin world which was considered a few years ago to be too rebellious this man is fully aware of the poverty of that part of the world and as such his choice of the name Franciscus (Francis), evoking the Saint of Assisi and his commitment to the poor, may be a sign of his program. It’s been more than 500 years since the first evangelization in the Latin New World, and it became high time that the Roman Catholic church showed the world that it is really a world church and not an Italian bastion.

Pope Francis, the 266th pontiff of the Roman Catholic Church, is seventy-six and was born to Italian immigrant parents and was raised in the Argentine capital. He reportedly came in second when Benedict XVI was elected. He was born in Buenos Aires, in 1936. He is the first ever from what old Popes call the New World.

President Obama was among the first world leaders to congratulate Francis in a message that emphasized the pope’s humble roots and New World background.
“As a champion of the poor and the most vulnerable among us, he carries forth the message of love and compassion that has inspired the world for more than 2,000 years — that in each other we see the face of God,” Mr. Obama said in a message released by the White House.
“As the first pope from the Americas,” the president added, “his selection also speaks to the strength and vitality of a region that is increasingly shaping our world, and alongside millions of Hispanic Americans, those of us in the United States share the joy of this historic day.”


The last months we could see that there where some power struggles in the Vatican and the last few years the Catholic Church had to tackle a lot of scandals. Pope John Paul and Benedict managed to continue the conservative line and get more power to the top.  The Roman Curia needs a clean up and reform, handling the sex abuse crisis and cleaning up the Vatican bank.
The Roman Catholic Church as the church in general needs people in charge that understands the problems of the church at present and take the effort to come closer to the people and their current problems. 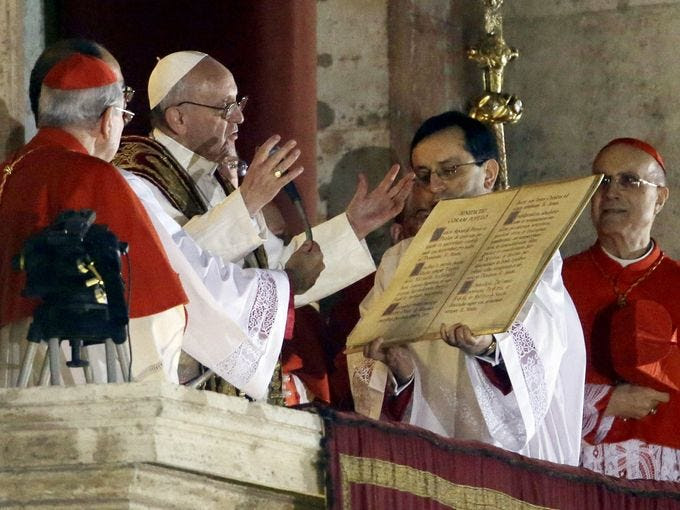 You may also find:

What non-Catholics think of the new pope
The new pope's first day: Mass with the cardinals Papacy
We Have a New Pope: Cardinal Bergoglio Is Pope Francis