Does there have to be a Holy Trinity Mystery

On Journey Towards Easter with subtitle: Discovering the beauty of truth, the writer who is an Englishman, living in Scotland writes that the Trinity is a symbol of the knowable and unknowable.


– the One who reveals Himself to us is the same One who can never be fully understood.

The god of Love from the start of His creation had the intention to have a good relationship with His creation. Good relations are build on comprehension, understanding each other and on being open for each other. God never had and/or never has the intention to have secrets for the world. For millenniums He wanted to play open card game with the people who inhabited His world. He took care all people could find a Guide in their life and would be able to find the guidebook or manual to make the best of their life.

The writer of the article himself knows:


The knowledge we receive from God about Himself is sure knowledge, by which we cannot be deceived, but it only serves to deepen our appreciation for how far God exceeds our expectations, and is infinitely more than we can or could ever have imagined.

Then he refers to the Old Testament reading for his day he want to celebrate a three-une god,
from Exodus (34:4b-6, 8-9), where we read that:


“4 And he hewed two tables of stone like unto the first; and Moses rose up early in the morning, and went up unto mount Sinai, as Jehovah had commanded him, and took in his hand two tables of stone. 5 And Jehovah descended in the cloud, and stood with him there, and proclaimed the name of Jehovah. 6 And Jehovah passed by before him, and proclaimed, Jehovah, Jehovah, a God merciful and gracious, slow to anger, and abundant in lovingkindness and truth; 7 keeping lovingkindness for thousands, forgiving iniquity and transgression and sin; and that will by no means clear [the guilty], visiting the iniquity of the fathers upon the children, and upon the children’s children, upon the third and upon the fourth generation. 8 And Moses made haste, and bowed his head toward the earth, and worshipped. 9 And he said, If now I have found favor in thy sight, O Lord, let the Lord, I pray thee, go in the midst of us; for it is a stiffnecked people; and pardon our iniquity and our sin, and take us for thine inheritance.” (Exodus 34:4-9 ASV)

He clearly understands that this passage speaks of God coming near to man (Moses in this case) and revealing Himself to us.


He ‘stood with him there’ and proclaimed His name – that is, His character, ‘a God merciful and gracious, slow to anger, and abounding in steadfast love and faithfulness’ (v.6), so that His people would know it for sure.

but than he makes a strange twist, mixing tow different persons, of one is not exactly a man because It is a Spirit and the other is a man of flesh, bones and blood.


God desires to come close to us and show us who He is – something shown to an even greater extent in today’s Gospel reading (John 3:16-18).

In that reading you may find:


“16 For God so loved the world, that he gave his only begotten Son, that whosoever believeth on him should not perish, but have eternal life. 17 For God sent not the Son into the world to judge the world; but that the world should be saved through him. 18 He that believeth on him is not judged: he that believeth not hath been judged already, because he hath not believed on the name of the only begotten Son of God.” (John 3:16-18 ASV)

clearly everybody should see that the God, Who does not tell lies,  has given His only begotten son to the world, i.e. not Himself.


The author of the article also says


To be saved by God we must first know who He is,

This is a very important issue. We should know exactly who Jesus is and who his Father is, the Only One True God.

Where he gets "the meditations" from he sells out: of His Church.
He does not give a clarification ho his church may be guided by the Spirit and than giving them the revelation that within God there would be a community of persons – Father, Son, Holy Spirit – who exist in an eternal pattern of mutual, self-giving love (which is true) but what he means is that they woudl also be one and the same person (which is not true).

People may not forget that being one in thought or even being equal does not mean being the same.

Lots of people do like mysteries but The God is a god of clarity. Some may like to say that we as human beings need the mystery of God and that in the Christian tradition the word “mystery” refers to something partially revealed, much more of which lies hidden.
We may wonder why so many would like to keep to teachings which are not clearly given in the Holy Scriptures but were imposed by men throughout history. Though beyond the reach or understanding of many of those Christians they keep refusing looking at what the words of the Bible say so clearly.

Plus more on the Trinity
++ 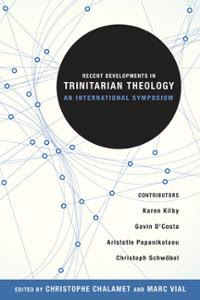 decades. Remarkably, all the main Christian denominations have participated in this, and contemporary Trinitarian theology is a discussion that often crosses over confessional boundaries.
+++