End 1970ies it looked like the Southern Baptitst Union was going to bring too many changes the followers of the original Anabaptists and Baptists could not accept.

From the 1980 onwards lots of disturbance was felt and in the 1990ies many Baptists became very disturbed by the image the public was getting from the Baptist they could see on the small television screen.  The screen at that time still might have been small but the impact was big.

The trinitarian Baptist gained more and more terrain in Europe and wanted to have theri American way of thinking imposed on us Europeans. For many years I resisted to leave the Baptists, because I wanted to honour those who had lost their life for our faith in the Only One God. At the end I only could follow thousands of my brothers and sisters by leaving the changes in the Baptist community for what they had become, with fear for what they still might become.

Our fear was totally founded. those who left the community had sound reasons, because the church gliding to main protestant church-denominations who believed in a three-une God and would if they were not carefull soon be taken over by other false teachings of those churches.

Today those Baptists are closer to the other protestant and Catholic denominations where it is not necessary to have a sound mind to decide to follow Jesus.

Once a church takes over the Trintiy to get more power and find more people to join them everything can happen to continue in the pagan traditions and to go further away from biblical teachings.

The Southern Baptists could see their churches following their union rules growing in amount. Like many other churches they do have to face the problem not many people are interested in God. Though they do know people do like a lot traditions and festivals. Feast for children having their first year in the lower school or for becoming of age are very popular. A special day for celebrating the by is also very much liked by people.
The Baptist Church also is aware of such events which could attract more people in their church. Like all other churches they saw their number of baptisms going way down.  Converts, new members, and the Millennial generation are unwilling today to commit themselves or to feel bounded by one or the other church denomination. To be baptised as an adult in front of others does not appeal to them. Certainly not going under water in front of so many people, at their age.

It is incredible but it seems that one demographic of Baptists is getting baptised in greater and greater numbers. Normally the rule for baptism was that the person should really know what he or she was choosing for. He should be of age. But the contemporary Baptists do not seem to find that important any more. For them children five and under can also be baptised. 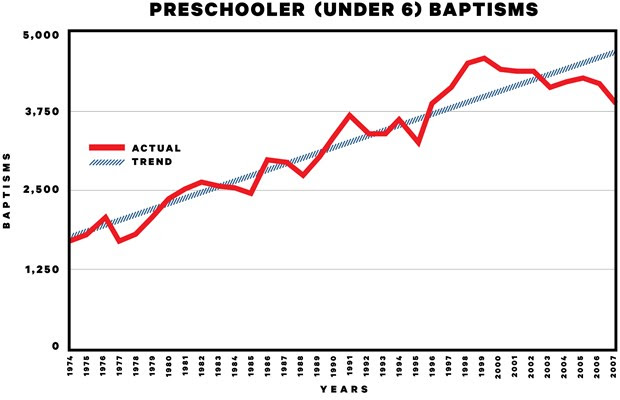 By Lutherans and other protestants such child baptisms also can be found more frequently. In a few years perhaps we shall see also a 'first communion' and a 'holy or second communion' like in the Catholic church, where people, though they do not go to mass regularly, can have a celebration for their kids where they can treat it with many presents and give a great feast for many guests, showing off with bouncy castles, electronic games, firework and exuberant meals for 60, 80- 150 guests, like mini-weddings and their sons and daughters dressed like little princes and princesses or brides.


Credobaptist traditions like the SBC usually baptize children at the “age of accountability” or “age of reason.” The Baptist Faith and Message asserts that children are not morally accountable until they are “capable of moral action.” Based on the coming-of-age celebration in Jewish culture (bar mitzvahs for boys and bat mitzvahs for girls), some place the age of accountability around ages 12 and 13. However, since children develop at different rates, there is latitude on pinpointing personal spiritual maturity. Still, Southern Baptist churches have traditionally said children cannot make a legitimate profession of faith until preadolescence. Thus, baptism is typically reserved for prepubescents on up. . .

Alvin Reid, evangelism professor at Southeastern Baptist Theological Seminary and task force member, said he suspects the main reason for the increase is


“well-meaning parents so want their children to follow Jesus that pastors have been pressured and have not taught well biblical conversion and discipleship.”