The widespread sectarian violence and ongoing military conflicts in several political hotspots, including Syria, Iraq and Lebanon, have not only claimed thousands of human lives and devastated fragile economies but also undermined the U.N.’s longstanding plans to eradicate hunger and extreme poverty worldwide.
The U.N. Development Programme (UNDP), the world body’s lead agency monitoring human development, points out that the political turmoil, including in countries such as Libya, Tunisia and Egypt, is threatening to derail the U.N.’s highly-touted Millennium Development Goals (MDGs), specifically in the Arab world.

Addressing violence against women, in all of its forms, is a global imperative and should be one of the international community’s top priorities, including in forthcoming intergovernmental processes, such as the post-2015 development agenda.
The translation and full implementation of these global norms into national laws, policies, and measures remain uneven and slow. This is clear from the prevalence of all forms of violence against women seen throughout the world.
The focus of prevention and response to violence against women should therefore be on strengthening the implementation of existing global policy frameworks and in ensuring accountability mechanisms are in place.

The Beijing Declaration and Platform for Action identified Violence against Women as one of its 12 critical areas of concern, and the review and appraisal of the Platform for Action is a key opportunity for the international community to not only acknowledge the progress made in the past 20 years but to also assess the remaining gaps and challenges in its implementation, including violence against women, to feed the lessons learned into the post-2015 development agenda processes.

UN Women has developed several good practices in engaging other stakeholders to hold member states accountable on their commitments to gender equality and the empowerment of women, in addition to our norm setting and knowledge building, and programmatic work in 81 countries.
UN Women has established global, regional, and national level Civil Society Advisory Groups, has worked through the U.N. Secretary-General’s “UNiTE campaign,” and the newly established “Empowering Women, Empowering Humanity: Picture it!,” and the “HeForShe” Beijing + 20 campaigns to engage the global citizenry on ending violence against women.


Since 1994, the year of the landmark International Conference on Population and Development (ICPD) in Cairo when 179 governments committed to a 20-year Programme of Action to deliver human rights-based development, UNFPA has identified significant achievements with regard to women’s rights and effective family planning, but also a dramatic increase in inequality. When we look at what is going on in Africa at the moment we should be more worried.

Not only is there ISIS which presents the women as a dish cloth to use for all the dirty work, which can be used to release sexual urges without any commitments and to try out the validity of the female slaves.

In much of the Arab world, women’s participation in the labour force, out of home, is the lowest in the world, according to the United Nations, while women in politics are a rare breed both in the Middle East and North Africa.
Perhaps one of the few exceptions is Algeria, says Lakshmi Puri, deputy executive director of U.N. Women. 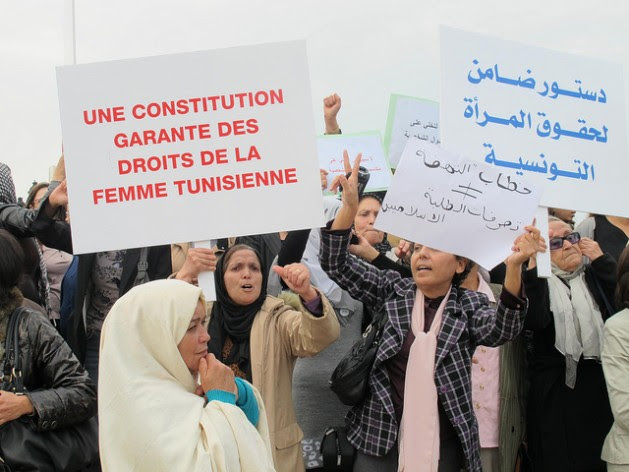 Sanam Anderlini, co-founder of the International Civil Society Action Network (ICAN) and a senior fellow at the Center for International Studies at the Massachusetts Institute of Technology (MIT), told IPS:


“We should steer clear of assuming that the low levels of participation in public spaces – political and economic – are ‘entrenched ‘cultural or religious values.’

“There is no doubt that culture and religion play some role, but the fact remains that over the past 30 years, and particularly in the last decade, we have seen the rising tide of very conservative forces in the region – largely supported by regional governments themselves – that are promoting a regressive agenda towards women.”


Let’s not forget that Egypt had a feminist movement in the 19th century, she added.
Puri listed several factors that negatively affect outcomes for women and girls.

These, she pointed out, include family codes and parallel traditional legal and justice systems that deny women property and inheritance rights, access to productive resources, sanction polygamy and early and child marriages, and put women at a disadvantage in marriage and divorce.
At the same time, it is essential to tackle negative misinterpretations of religion or culture that not only condone but perpetuate myths about inherent inequality between men and women and justify gender-based discrimination.


“As we at UN Women have pointed out, along with many faith-based and other organisations, equality between women and men was propounded centuries ago in the Arab region,”

Gender-based violence is one of the world’s most prevalent human rights abuses, and has one of the greatest degrees of impunity surrounding it,but in Africa this seems to be tried tout into the top.

At the same time, governments along with all stakeholders, including civil society, need to put in place an enabling environment in order to increase women’s participation in all spheres of life, said Puri.

Maternal mortality has dropped by almost 50 percent and more women than ever before have access to both contraception and family planning mechanisms, supporting a decrease in child mortality. Furthermore, women are increasingly accessing education, participating in the work force and engaged in the political process.
Nevertheless, a gross disparity remains between the developed and developing worlds. In a press conference, Dr.  Osotimehin indicated that while the global average likelihood of a woman dying in childbirth is one in 1,300, this increases to one in 39 when evaluating developing nations specifically.

In January 2012, a Tuareg rebellion triggered a series of events that lead to the fall of almost two-thirds of Mali’s territory. The Tuareg rebels were soon ousted by Islamic movements, several of which are linked to Al Qaeda. But military intervention from French, and later African, troops, liberated the north in January 2013 and led to elections here in July of that year.
But hundreds of thousands of displaced persons and refugees have still not returned to their homes.

A year after Mali’s civil war came to an end, there proofed enough reason to be increasingly concerned that the country risked an eventual return to violence, particularly as Malian authorities continued to marginalise the restive north while neglecting to pursue meaningful political and economic reforms.
Indeed, a lack of equitable opportunity across Mali has caused northern Tuareg separatists to cite political and economic marginalisation as their reason for rebelling in the first place. The Tuaregs have contested Mali’s north since the 1990s, launching four separate rebellions, finally succeeding due to arms obtained from the Libyan Civil War against Muammar Gaddafi in 2011.

The Syrian war continued and lots of Europeans found their way to go and fight with the Jihadis. Some of them got their training in Belgium and one of them even was two years in the Belgian army where he learned the trade of weaponry.

In the Turkish camps we can see how people got used to the hopelessness and started to create their own  little world with their own renewed economy.

In one of the last camps to be built by the Turkish government in 2012 Harran is considered the most modern, with a capacity for lodging 14,000 people in 2,000 containers and having its school for 4,700 Syrian children of all ages run by Helit who had been the headmaster of a school in Syria before the outbreak of the armed conflict in Syria in March 2011.

In the meantime Boko Haram has been massing and launching lightning strike attacks on several isolated regions frighthening more than 200 trained teachers so that they refused to take up their posts in Cameroon in 2014.


“The crisis in Syria is a crisis for development across the Arab region,”

While suffering a major setback in human development, including in education, literacy, health care and life expectancy, Syria has also been singled out as one of the countries responsible for triggering the spreading economic chaos in the region.

As the Egyptian revolution against Hosni Mubarak celebrated its fourth anniversary, having seen the military junta under General Abdel Fattah al-Sisi resurrecting dictatorship under the veneer of “constitutional” legitimacy and on the pretense of fighting “terrorism”, Egypt still seems a problem country where even women are not at all safe when in public places. Often they are gangraped and treated as scum but those who call themselves Muslim, but do such things which are against the will of Allah.
Syria is still ablaze. Yemen has yet to sever the tentacles of the Saleh regime, and Libya remains in the chaotic throes of tribal fissures and militia violence.

Tunisia could have been the only “Arab Spring” country that was transitioning to democracy wisely and pragmatically, though more and more fundamentalist Muslims also bring terror in the country.
In 2013-14 the Salafists, at first wildly successful in channeling the frustration of Tunisia’s poor after the fall of former dictator Ben Ali, became publicly rejected by Ennahdha. After Ennahdha cancelled the national conference of ultra-conservative group Ansar Al Charia in May, and in August 2013 officially labeled it a ‘terrorist group’, average Tunisian Salafists were facing the heat, like those arrested in Metlaoui.

Residents of Tunisia's two main border crossings with Libya have begun a general strike to protest what they say is excessive force by police during clashes at the weekend that left one person dead.
The unrest in Ben Guerdane, near the northern Mediterranean crossing, and Tatouine, near the southern desert crossing, is influenced in part by the ongoing civil war in Libya. It is the first major challenge of Tunisia's new government and underlines the economic and political obstacles to stability and prosperity.
Locals demonstrated after the imposition of new border taxes disrupted the cross border trade the region depends on.
Residents closed schools, businesses and hospitals at the beginning of this month to protest police action at the second weekend.