From April 15 to 17 the 17th annual White Privilege Conference was held in Philadelphia.

Activist and author Paul Kivel identified three particularly severe problems in the modern world that are caused or worsened by Christianity.

I could agree with his idea about certain people storming for their faith, bringing crusades, like we can see the crusades of the Muslim brothers of today. Though I would not call it Christianity's effort to spread Western ideas and influence but love to ask people to see the big difference between Christianity and Christendom, the first one preaching world peace and equality for all people, leaving everybody to choose for their own God or gods, whilst certain people in Christendom thinking all should be part of their religion and belief in their threeheaded god. 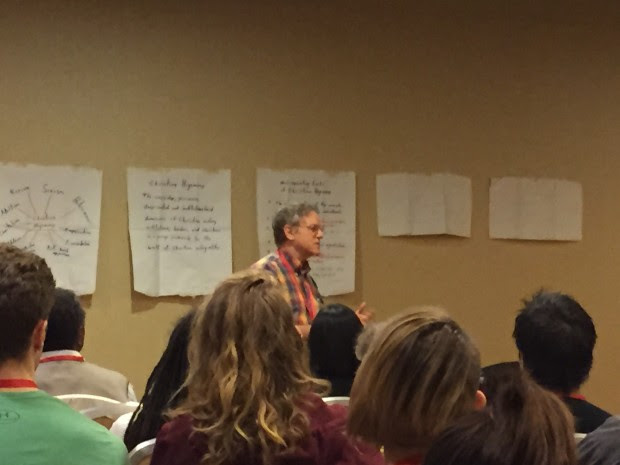 Paul Kivel lecturing in front of his homemade posters explaining Christian hegemony [Blake Neff] On one poster, he showed “Christian hegemony” at the center of a web that included ideas like “racism,” “sexism,” and “ableism.”


Perhaps Kivel had in mind how certain evangelicals tried to bring their faith to the African communities and how Christian groups or Christian nations went to war in the East.

I would agree with the economical aspect brining people at war, but that has nothing to do with Christianity. Most wars are a matter of power and of getting more material wealth, not spiritual wealth.

As third problem was mentioned that


under Christianity mankind has dominion over the Earth, rather than requiring that humans treat the Earth itself as 'sacred.'"

Once again here could be better spoken of Christendom. In Christianity all teaching is directed to respect for the Work of the Divine Creator and as such every creature has to be respected and man has to treat nature as good has he can. In Christianity each lover of God should understand that we as human beings are only here on acceptance and have the world in loan. It does not belong to any one person in particular, except God.
It is by human's wrong doing that we are now facing the problem of "climate change" and not because of those believing in Jehovah God and in Jesus Christ, the son of God.

It is not because it is said in the Bible that man has been given dominion over all other living things, that it would sanction man's abuse of the environment or other creatures.
(Genesis 1:28; Matthew 25:14-30; Exodus 23:10-11 and Leviticus 25:1-7).


Christianity orients us to distinguish between good and evil, which forces us to adopt a "with us or against us" mentality. "There's nothing inherently good or bad about the weather or about people,"

Good versus bad does not mean with us  or against us, and such mentality has not to be provoked by being a Christian.  Kivel makes an irrational leap that to distinguish between good and evil leads to condemnation of various things as worthy of destruction.There are Christians, who are trinitarians, and cannot cope with people who have an other faith than they, but more often it are non-religious people from certain political groups, who have much more difficulties with believers in God and who are most intolerant toward people and ideas of other religions or secularists.


White Privilege Conference: Almost Everything Bad Is Tied To Christianity