For those who do everything to stop the work of Christadelphians

In this godless world we do find lots of people who try to get people away from their faith in the only One True God. The majority of the people who are against Christadelpians are people who call themselves Christian. They tell all sort of lies about the founding fathers of the Christadelphians and mostly have no idea how they wanted to be seen in a movement which was to follow Christ and not as such an other human person. What disturbs them so much is that Christadelphians do not worship a triune godhead or the Trinity. This makes them so cross that they find they can use all sort of means to get the Christadelphians or Brothers in Christ, out of the picture. Though the Christadelphians are not the only one they fight against. The other even more well-known denomination is the Jehovah's Witnesses, which they hate even more.

What they also do not seem to understand properly is how the JW and Cd are structures or not structured and how they organise their meetings or worship services. For the JW it is more clear for them how the Watchtower Bible and Tract Society directs everything. For the Cd they also think there is a general governing body like the Governing Body of the JW. But then they see some differences in the several groups and claim than those groups are not following John Thomas or are having their own weird teachings. Looking at their discussions about those teaching we mostly see that they did not take the effort to really look in detail to the teachings of the Christadelphians, and continue to build their fantasies on sayings from other trinitarian denominations who wrote untrue things of the Christadelphians.

It is clear that their agenda is not only to destroy those non-trinitarian denominations, but that they really want to try every one away from the Only One True God Who is an unseen eternal Spirit. Because they want to get every body to believe in their Trinity and to their denomination, we can say that their aim is really to work against Jehovah's followers and therefore it can be said that they are anti-Jehovah.
They may call us the anti-christ, but it are more them that are the Anti-Christ, spoken about in Scriptures.

Please do find out more  about how can be reacted against those who do not love God, nor His people and find also some ways to look at several Christian denominations  and how we should look at the Bible, the book of books that should be our Guide and Anchor. On the new site is shown how we should trust the bible more than those sites which cling to human doctrines. 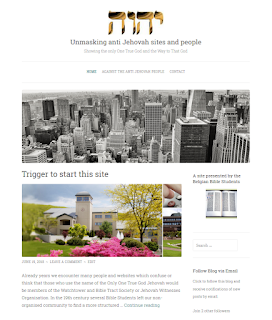