Non-practicing Christians widely believing in a god or higher power


Non-practicing Christians widely believe in God or another higher power

Of those who call themselves Christian the majority believe in the Trinity and not as such  as Pew count them as believers in God as described in the Bible. In the 27% who believe in God, the majority believe in a concept they were brought up with, some Catholics even not knowing that their church worships a Trinity, or do not know what it entails. Non-trinitarian Christians though still may be counted as the minority 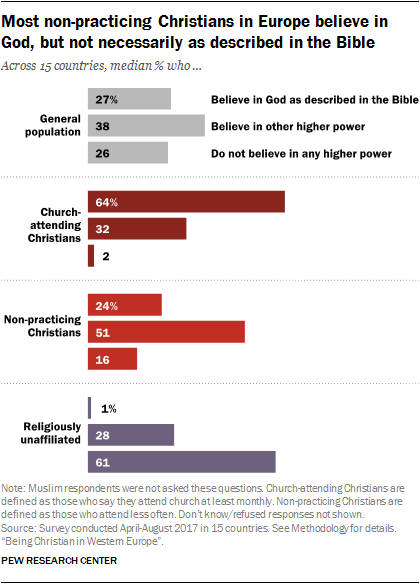 For instance, in Catholic-majority Spain, only about one-in-five non-practicing Christians (21%) believe in God “as described in the Bible,” while six-in-ten say they believe in some other higher power or spiritual force.

Non-practicing Christians and “nones” also diverge sharply on this question; most unaffiliated people in Western Europe do not believe in God or a higher power or spiritual force of any kind. (See below for more details on belief in God among religiously unaffiliated adults.)
Similar patterns – in which Christians tend to hold spiritual beliefs while “nones” do not – prevail on a variety of other beliefs, such as the possibility of life after death and the notion that humans have souls apart from their physical bodies. Majorities of non-practicing Christians and church-attending Christians believe in these ideas. Most religiously unaffiliated adults, on the other hand, reject belief in an afterlife, and many do not believe they have a soul.

Indeed, many religiously unaffiliated adults eschew spirituality and religion entirely. Majorities agree with the statements, “There are no spiritual forces in the universe, only the laws of nature” and “Science makes religion unnecessary in my life.” These positions are held by smaller shares of church-attending Christians and non-practicing Christians, though in most countries roughly a quarter or more of non-practicing Christians say science makes religion unnecessary to them. (For a detailed statistical analysis combining multiple questions into scales of religious commitment and spirituality, see Chapters 3 and 5.) 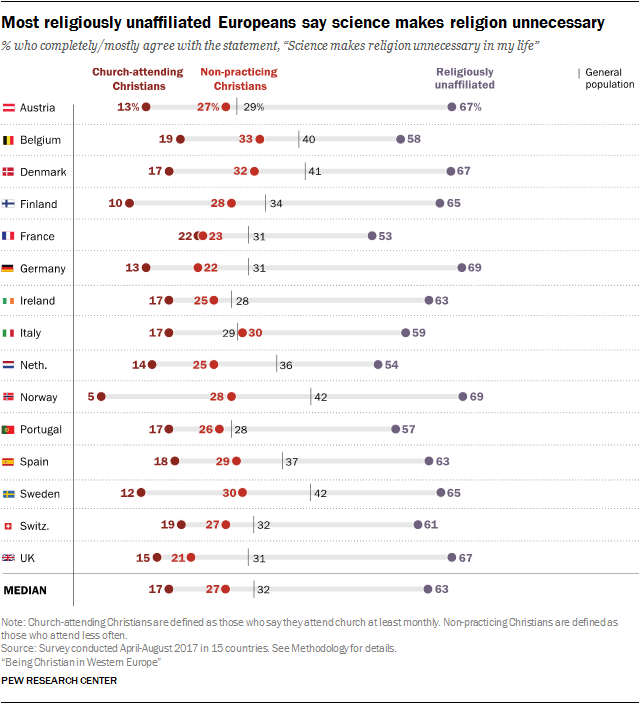