Today we do find a lot of people, in our regions, who say they are Christian and with that mostly mean Roman Catholic, but nearly never go to worship services like mass.

The majority of Europe’s Christians are non-practicing, but they differ from religiously unaffiliated people in their views on God, attitudes toward Muslims and immigrants, and opinions about religion’s role in society.

Western Europe, where Protestant Christianity originated and Catholicism has been based for most of its history, has become one of the world’s most secular regions. Although the vast majority of adults say they were baptized, today many do not describe themselves as Christians. Some say they gradually drifted away from religion, stopped believing in religious teachings, or were alienated by scandals or church positions on social issues, according to a major new Pew Research Center survey of religious beliefs and practices in Western Europe.

Yet most adults surveyed still do consider themselves Christians, even if they seldom go to church. Indeed, the survey shows that non-practicing Christians (defined, for the purposes of this report, as people who identify as Christians, but attend church services no more than a few times per year) make up the biggest share of the population across the region. In every country except Italy, they are more numerous than church-attending Christians (those who go to religious services at least once a month). In the United Kingdom, for example, there are roughly three times as many non-practicing Christians (55%) as there are church-attending Christians (18%) defined this way. 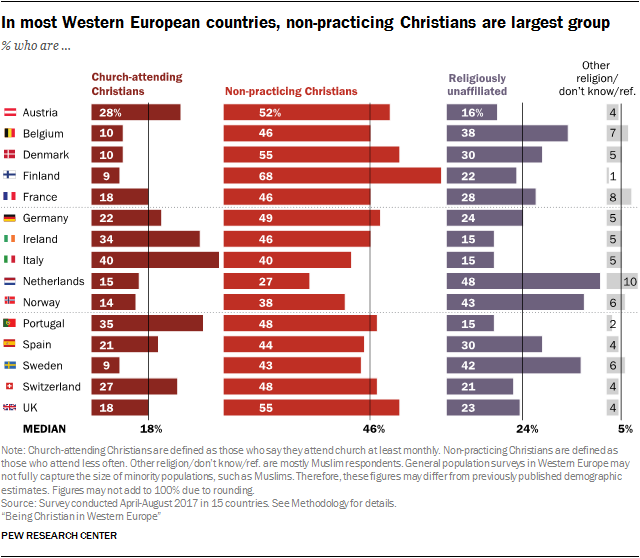 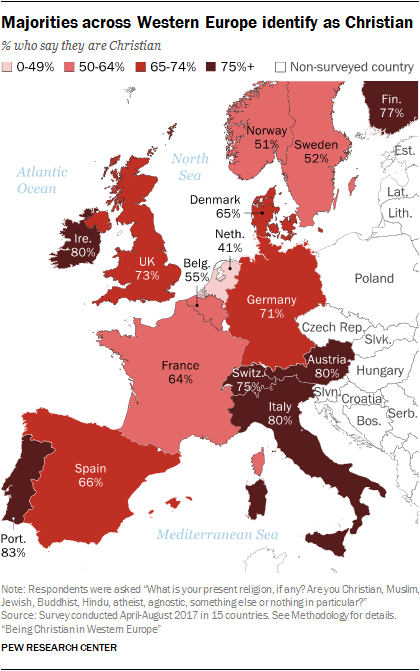 Non-practicing Christians also outnumber the religiously unaffiliated population (people who identify as atheist, agnostic or “nothing in particular,” sometimes called the “nones”) in most of the countries surveyed.1 And, even after a recent surge in immigration from the Middle East and North Africa, there are many more non-practicing Christians in Western Europe than people of all other religions combined (Muslims, Jews, Hindus, Buddhists, etc.).

The 10% for Belgium is more 8%, where the Roman Catholic Churches are less filled and of the protestant churches the Pentecostals get most people in  their church-services. Where we can find most people going to a religious service is by the Islamic community where the garage mosques and official mosques may count on a very good attendance on Friday night.