The Israel Antiquities Authority has announced the discovery of a 10,500 year old woven basket in the Judaea desert.
Discoveries both of human artefacts and human remains that are older than six thousand years pose a fundamental challenge both to the belief that humans would only six thousand years old and the concept of a ‘seven thousand year plan’.
Between 1946 and 1956, some 981 different texts and scrolls were discovered in eleven caves in the eastern Judaean Desert of what is now the modern-day West Bank. This collection known as the Dead Sea Scrolls, was a huge sensation.
Preserved by the aridity of that region in the southwestern part of Israel, these scrolls dated back to around 100 B.C.E.-100 C.E..  They included Hebrew texts of much of the Old Testament, which were about a thousand years older than previously known Hebrew scriptures (or Old Testament) manuscripts and showed that the these texts had been transmitted rather faithfully over centuries of scribal copying. There were also other writings peculiar to the Jewish community that lived near those caves, which gave new insights into the religious and social currents of that day.
The previous weeks Israeli archaeologists, having searched the caves the Judean Desert announced their findings of further texts, giving us withdozens of new Dead Sea Scroll fragments some more insight in the texts of the minor prophets.
Other objects found alongside the scroll fragments also withstood the test of time, including ancient olive pits; remnants of clothing and sandals and a wooden lice comb similar to one that might be used today.

Archaeologist Chaim Cohen says the four-year project has been vital to protect the treasures inside the cave system from future plunder.

"This project is the protection of the area because, again, it is almost impossible to beat the looters," he said. "They're working, and the solution was to get to the case before the looters."

The massive excavation site spans parts of southern Israel and the Israeli-occupied West Bank. Israel has long been criticized for removing objects found in the Palestinian territories.

According to international law, taking cultural property from an occupied territory is forbidden, but those concerns haven't prevented the Israeli Antiquities Authority from putting the discoveries on display. 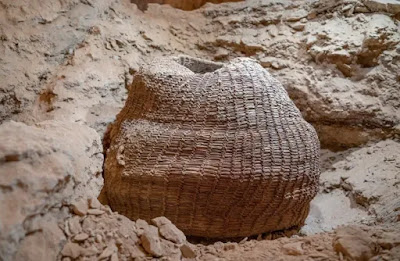 The basket, the discovery of which was announced Tuesday 16th March was found in Muraba’at cave in the Judaea desert. According to the Jerusalem Post article, it is believed to be the oldest of its kind ever uncovered.
Ken Gilmore, an Australian Christadelphian,  reacts on these findings and certain people their idea that mankind only exists a 5 or 6 thousand years:

“The transition from the food-gathering phase to fully developed agriculture and pastoralism was a long process which began in the Near East around 10,500 B.C.E. and lasted several thousands of years. It was accompanied by changes in social organization and economic activity which expressed themselves in the establishment of settled communities and the eventual birth of the ancient Near Eastern civilizations. Some of the most important steps in this development can be traced in Palestine.”

Read more on what he has to say:

How a 10,000 year old basket (and the whole archaeology of Neolithic and Chalcolithic Palestine) falsifies the fundamentalist belief in a Seven Thousand Year Plan